Written Expression (Gr. 3 and up)


Executive Functioning Skills (Gr. 5 and up)

Grade K-3 - Get Ready for School (reading and writing)


Grade 4 and up - Accelerated Writing and Reading Comprehension

We, as parents, often worry about academic successes and achievements. We worry that if a child doesn’t read, or skip-counts, or multiplies and divides while their peers are already doing that, our children are missing out.

What we must keep in mind is that academic learning is only a part of the whole process of learning and places itself at a tip of the iceberg. It is well depicted in the The Learning Pyramid designed by Occupational Therapists Mary Sue Williams and Sherry Shellenberger. The pyramid showcases the skills preceding the academic learning, the so-called building blocks a child has to develop in order to build well-grounded, stable academic skills.

In case one block is a bit shaky, but other blocks are in place and well-fixed, the learning is likely to happen smoothly and uneventfully. If some blocks are missing and others are unstable, the learning process will be quite challenging. If many blocks are not fixed or underdeveloped, the academic learning becomes impossible. 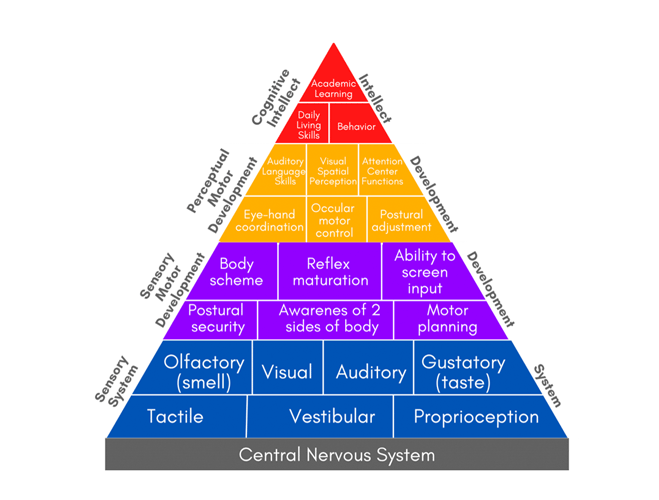 Generally speaking, academic learning is the result of skills, or these ‘building blocks’, which children have developed overtime so they can acquire new knowledge. Think about running. In order to run, we must first learn to crawl, then walk and so on. What is very important to keep in mind when we assist the growing and maturing process of a child is that it takes some children longer to establish the building blocks, and it’s okay. It makes sense to spend time growing the foundation of an iceberg, because only then is it possible to grow the tip of it, which is the academics.

The first foundational block typically finishes developing by the age of two. It involves the smell, vision, hearing, taste, touch, movement and body awareness. This is the stage where children are naturally curious about the world around them and actively explore. When children actively use their senses to learn and engage, they create and strengthen neurological pathways for the next stage. Children on the autism spectrum might show problems with speech, behaviour and other issues, if this stage is not fully completed. This is the reason why they might need Occupational or Sensory Integration Therapy.

The second foundational block is the sensorimotor development. That stage happens almost simultaneously as the first one and involves a combination of physical and cognitive developments, such as crawling, grasping, pulling. Examples of sensorimotor development include body and spatial awareness, reflex maturity, ability to screen input, balance, awareness of two sides of the body, and motor planning. When children need help developing it, some examples of good activities might include massage, bicycling, crossing middle-line exercises or other activities helping with bilateral integration.

The third foundational block is perceptual motor development. It is the connection of the sensory skills (the brain) to their motor skills (physical). Such skills involve language, attention, visual spatial relationship, eye-hand coordination, control of eye movements, postural adjustments. The activities to promote and develop the perceptual motor development might include singing, dancing, cutting, putting puzzles together, rhyming poems and playing ball.

The fourth, and final foundational block preceding academic learning is the daily living skills and behaviour. Executive functioning, emotional intelligence and social skills fall under this category. These skills take longer to develop and are frequently addressed simultaneously with academic learning. Executive functioning includes planning, organizing and prioritizing assignments. Emotional intelligence is the ability to recognize daily emotions, process them and bounce back from unpleasant episodes. It also involves self-confidence and self-control. Social skills is the ability to successfully interact with others, manage and control own behaviours while interacting with others.

Cognition and intellect, or academic skills, include literacy, numeracy, and critical thinking skills. They are at the top of the pyramid, or the tip of the iceberg. They are the final, top skill that will most definitely come together, provided that the rest of the pyramid is stable.

We help parents to homeschool their children!

About the Author: Read Write Think

Read Write Think is a learning centre in Vaughan specializing in academic support for students that require 1-on-1 or small group tutoring.

Have questions? Send us a message